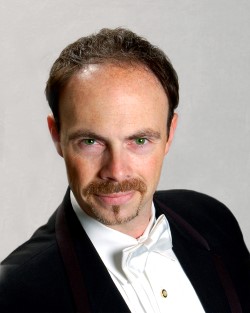 Russell McCutcheon is the Musical Director and Conductor of the Pennsylvania All-State Band, a position he accepted in 2013 after working with the band since 2009.  In this role, he coordinates membership of the ensemble, programs musical selections with input from associate conductors, plans and leads rehearsals, and  guides the musical staff.

Dr. McCutcheon is Director of Bands in the Sunderman Conservatory of Music at Gettysburg College in Gettysburg, Pennsylvania. At Gettysburg, he conducts the Wind Symphony, Sunderman Conservatory Symphony Band, and the Sunderman Chamber Winds. He also directs the Bullets Marching Band. In addition, he teaches conducting, music education courses, supervises student teachers in the field, and serves as co-advisor of the Gettysburg College Chapter of the National Association for Education Association.

Dr. McCutcheon received his Ph.D. in Music Education with a concentration in Wind Conducting from the University of Florida in Gainesville where he served as Assistant Conductor of the Wind Symphony. He was in the conducting studio of Dr. David Waybright and his music education advisors were Drs. Russell Robinson and Charles Hoffer. Additionally, he has studied conducting with Rodney Winther, Anthony Maiello, and Tom Lee. He received his Master of Science in Music Education from Troy University in Troy, Alabama.

Prior to his appointment in the Sunderman Conservatory, Dr. McCutcheon served for three years as Associate Director of Band, Wind and Percussion Activities at Otterbein University in Westerville, Ohio and has eight years of high school teaching experience in the public schools. Bands under his direction have performed in China, Singapore, England, Scotland, Italy, and Switzerland. He has been a guest conductor at the WASBE 2005 International Conference in Singapore and in 2009 spent nine days in residence as invited guest conductor/clinician with the Universidad de Caldas Wind Ensemble in Manizales, Colombia as part of the 15th Annual Yamaha Latin American Wind Band Conference.  Of his conducting, composer Steven Bryant said: “Russell McCutcheon brings a unique mix of talents and experience to his music-making…my work, Ecstatic Waters, requires the players and the conductor to go above and beyond their usual roles, and he demonstrated fantastic attention to both the musical and the technical details of my music.”  In 2013, the Sunderman Conservatory Wind Symphony released a recording titled: “Gettysburg at 150: Music of the American Civil War.”  This disc, commemorating the Sesquicentennial Anniversary of the battle of Gettysburg, was named 2013 Grammy nomination eligible in two categories.

Dr. McCutcheon is the founding conductor of the Atlantic Chamber Winds, whose latest recording, Volume 1 of The Cochran Chamber Winds Commissioning Series, was released in 2012 on the Mark Masters Label.  Of this recording, composer Adam Gorb noted: “I loved your performance of French Dances Revisited…your ensemble plays the work so sensitively and with such spirit.”  In the September 2012 issue of WASBE World Magazine, Leon Bly wrote: “the Atlantic Chamber Winds and Russell McCutcheon are to be congratulated for making this music available on a first class recording.”  He is a regular contributor to the best-selling book series, “Teaching Music through Performance in Bands,” and is an active clinician and guest conductor. He has been the featured clinician/conductor for many county and district honor bands, was invited to serve as the winds and percussion clinician for the Ohio All-State Orchestra, travels regularly to music camps nationally, and adjudicates band festivals in Pennsylvania, Virginia, Ohio, Florida, Mexico and the Bahamas.  As a percussionist, Dr. McCutcheon has served as principal timpanist for the Westerville Symphony Orchestra and the Central Florida Symphony Orchestra.